“I translated from German, at the request of the publisher Longanesi… Oswald Spengler’s vast and celebrated work The Decline of the West. That gave the opportunity to me to specify, in an introduction, the meaning and the limits of this work which, in its time, had been world-famous”. These words begin a series of critical paragraphs on Spengler in Julius Evola’s The Path of Cinnabar (p. 177).

Evola pays homage to the German philosopher for casting aside “progressivist and historicist fancies” by showing that the stage reached by our civilization shortly after the First World War was not an apex, but, on the contrary, a “twilight.” From this Evola recognized that Spengler, especially thanks to the success of his book, made it possible to go beyond the linear and evolutionary conception of history. Spengler describes the opposition between Kultur and Zivilisation, “the former term indicating, for him, the forms or phases of a civilization that is qualitative, organic, differentiated, and vital, the latter indicating the forms of a civilization that is rationalist, urban, mechanical, shapeless, soulless” (p. 178). 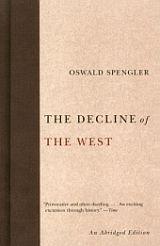 Evola admired the negative description that Spengler gives of Zivilisation but is critical of the absence of a coherent definition of Kultur, because, he says, the German philosopher remained the prisoner of certain intellectual schemes proper to modernity. “A sense of the metaphysical dimension or of transcendence, which represents the essence of all true Kultur, was completely lacking in him” (p. 179). 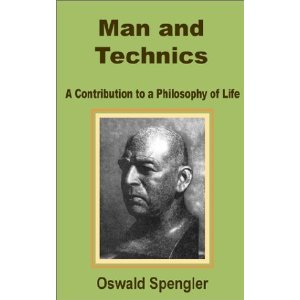 Then Evola reproaches Spengler for being influenced by German post-romantic vitalist and “irrationalist” strains of thought, which received their most comprehensive and radical expression in the work of Ludwig Klages. The valorization of life is vain, explains Evola, if life is not illuminated by an authentic comprehension of the world of origins. Thus the plunge into existentiality, into Life, required by Klages, Bäumler, or Krieck, can appear dangerous and initiate a regressive process (one will note that the Evolian critique distinguishes itself from German interpretations, according exactly to the same criteria that we put forward while speaking about the reception of the work of Bachofen).

Evola thinks this vitalism leads Spengler to say “things that make one blush” about Buddhism, Taoism, Stoicism, and Greco-Roman civilization (which, for Spengler, is merely a civilization of “corporeity”). Lastly, Evola does not accept Spengler’s valorization of “Faustian man,” a figure born in the Age of Discovery, the Renaissance and humanism; by this temporal determination, Faustian man is carried towards horizontality rather than towards verticality. Regarding Caesarism, a political phenomenon of the era of the masses, Evola shares the same negative judgment as Spengler.

The pages devoted to Spengler in The Path of Cinnabar are thus quite critical; Evola even concludes that the influence of Spengler on his thought was null. Such is not the opinion of an analyst of Spengler and Evola, Attilio Cucchi (in “Evola, Tradizione e Spengler,” Orion no. 89, 1992). For Cucchi, Spengler influenced Evola, particularly in his criticism of the concept of the “West”: by affirming that Western civilization is not the civilization, the only civilization there is, Spengler relativizes it, as Guénon charges. Evola, an attentive reader of Spengler and Guénon, would combine elements of the the Spenglerian and Guénonian critiques. Spengler affirms that Faustian Western culture, which began in the tenth century, has declined and fallen into Zivilisation, which has frozen, drained, and killed its inner energy. America is already at this final stage of de-ruralized and technological Zivilisation.

It is on the basis of the Spenglerian critique of Zivilisation that Evola later developed his critique of Bolshevism and Americanism: If Zivilisation is twilight for Spengler, America is the extreme-West for Guénon, i.e., irreligion pushed to its ultimate consequences. In Evola, undoubtedly, Spenglerian and Guénonian arguments combine, even if, at the end of the day, the Guénonian elements dominate, especially in 1957, when the edition of The Decline of the West was published by Longanesi with a Foreword by Evola. On the other hand, the Spenglerian criticism of political Caesarism is found, sometimes word for word, in Evola’s books Fascism Seen from the Right and the Men Among the Ruins. 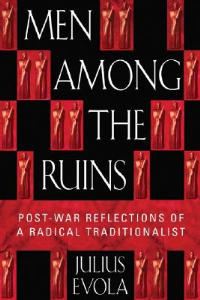 Dr. H. T. Hansen, the author of the Introduction to the German edition of Men Among the Ruins (Menschen inmitten von Ruinen [Tübingen: Hohenrain, 1991]), confirms the sights of Cucchi: several Spenglerian ideas are found in outline in Men Among the Ruins, notably the idea that the state is the inner form, the “being-in-form” of the nation; the idea that decline is measured to the extent that Faustian man has become a slave of his creations; the machine forces him down a path from which he can never turn back, and which will never allow him any rest. Feverishness and flight into the future are characteristics of the modern world (“Faustian” for Spengler) which Guénon and Evola condemn with equal strength.

In The Hour of Decision (1933), Spengler criticizes the Caesarism (in truth, Hitlerian National Socialism) as a product of democratic titanism. Evola wrote the Preface of the Italian translation of this work, after a very attentive reading. Finally, the “Prussian style” exalted by Spengler corresponds, according to Hansen, with the Evolian idea of the “aristocratic order of life, arranged hierarchically according to service.” As for the necessary preeminence of Grand Politics over economics, the idea is found in both authors. Thus the influence of Spengler on Evola was not null, despite what Evola says in The Path of Cinnabar.

Note: Evola’s The Path of Cinnabar is now available in English translation from Arktos Media.